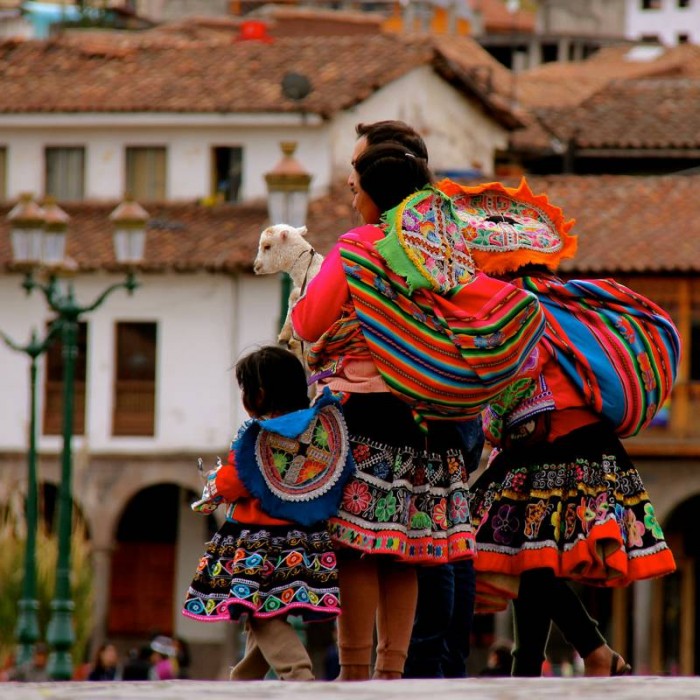 Making up much of its hemisphere, the region of Latin America by most definitions spans two continents and several countries in the Caribbean including Costa Rica, Mexico, Nicaragua, Panama, Peru, Ecuador and many more! It’s large area made up of immeasurably diverse countries that all share similar characteristics: fascinating ethnic diversity, lively and vibrant cultures, colonial and pre-Hispanic histories, stunning natural landscapes ranging from snowcapped volcanic peaks to lush uninhabited jungles, and unbelievably friendly citizenry. Since it is a similar culture to many European and North American cultures, some people don’t bother to do much research between heading off to this exciting land. However, there are some things you should know before traveling in Latin America:

Volcano in the desert of Atacama, Chile

2. Spanish is Different Everywhere
Many people plan on visiting more than one country if they take longer holidays to Latin America, and backpackers love it in particular. Why? Because the vast majority of countries in the region use Spanish as their official language. If you know Spanish, you can traverse the better part of two continents and visit a wide variety of nations. It’s pretty cool, but don’t be deceived into thinking it’s quite that simple.

Spanish, especially colloquial expressions and slang, which you’re likely to encounter when conversing with everyday folk, is different in each country – and sometimes even in different regions of different countries! In Costa Rica, for example, you can use the expressions “Pura vida!” and “Pura vida?” to mean “Hello!” “How are you?” “Good!” “Best wishes!” etc. But if you used “Pura vida!” as your opening line in a South American country, people might give you a weird look and not really get what you mean.

Don’t fret – if you know Spanish, you’ll be able to get by just fine. However, it’s a good idea to recognize that each country and even each region has its own very distinct version of Spanish, and you can greatly improve your interactions with locals by trying to learn some of the key phrases.

And if you don’t know Spanish (or Portuguese, if you’re headed to Brazil), it’s essential to buy a dictionary or phrasebook to get the most out of your experience! A general Spanish dictionary would work fine, but it would be even better to buy one for the specific country you’re going to.

3. Research the Mosquitoes
The internet can bring you all sorts of tales from travels to tropical regions and foreign countries – malaria, dengue, yellow fever, and the latest mosquito-borne disease, chikungunya. Some of these, like yellow fever, have vaccines that you should get before you leave. While some doctors are keen on prescribing malaria medication, that’s probably because they’ve never actually taken it. Its side effects have inspired horror stories of their own, so it’s best to just load up on your favorite high DEET mosquito spray, and also to do some research.

Red howler monkey pack in the jungle near Coroico, Bolivia

Tell your doctor the exact regions you’ll be going to, because even if some of these diseases are present within a country, they are oftentimes confined to a certain few regions and are all but unheard of in others. Save yourself the hassle by doing the research first to determine if malaria, for example, is really a threat to you.

4. Time Dilation
Famous physicist Albert Einstein developed the concept of time dilation – or the idea that as you approach the speed of light, time slows down. And if you are on Earth and your friend is flying around close to the speed of light, time will pass by much slower for your friend than it does for you. Time does not always move at the same speed. Clocks tick at a different pace depending on where they are. As a tourist, especially if you’re from the United States, it is useful to apply this type of thinking to Latin America.

To the frantic, time-obsessed, business-minded tourist who is new to the region, it may seem like Latin Americans move at an entirely different pace. The line at the cash register might not move quickly because the cashier is catching up with the person being check out. The local concert you thought you’d check out that was supposed to start at 8 might actually start at 8:45 or 9. You brought your bike into a shop and when asked when it will be done, you get the response “ahorita,” or “now-ish” which can mean anything from “Just 5 more minutes” to “I think we might be able to finish it today.” And all of this inevitably stresses you out, but none of the locals seem to care.

Lama on the Altiplano, Bolivia

The best advice? Embrace the lifestyle. Adopt their attitude. Synchronize yourself to a slower clock. Being more laid back about your itinerary and logistics can lead you to new adventures you might not otherwise have had, and at the very least, you’ll feel as happy and as unburdened by the hour as most of the people here.

5. Bring Your Own Sunscreen
In some of the sunniest places in Central and South America, sunscreen can be surprisingly expensive. Of course, prices vary from country to country, but if you’re planning on going to remote areas, toiletries in general will become more expensive and there will be less variety in shops. Save yourself the trouble by bringing your favorite kinds for face and body before you go, and if you forget anything, try to stock up when you’re in a bigger city.

6. Beach Attire Varies
Beach attire varies tremendously based on the country and region you’re visiting. If you’re headed to Brazil, for example, you can pull out your skimpiest bathing suit possible and blend in just fine. In other places in Latin America, especially rural or poorer places with less tourist traffic, many people don’t even wear bathing suits and will head straight into the water with their clothes on – perhaps because swimwear is an extra cost, but modesty also plays into it. Be sure to get the lay of the land wherever you’re going before you get too comfortable. You don’t have to try to blend in, but I’ve heard enough stories about tourists treating less-crowded beaches like nude beaches and locals reacting in a pretty negative manner.

Nature of the Isla Margarita, Venezuela

7. You Will Become Interesting
Sometimes, especially when in foreign environments, I prefer to play the role of a wallflower – observing, soaking in, enjoying, and not interacting until I get my bearings. But if you’re a single traveler, or only traveling with one or two others, and especially if you’re trying to surround yourself with locals more than other tourists, people will inevitably be curious about you. You’ll be grilled about your hometown, your family, your significant other (and if you don’t have one, why not?), where you’ve been, where you’re going, how you like it here… and it will likely prove to be a fun conversation for you and your new local friends, but it can be a bit exhausting and surprising if you’re not prepared.

8. You Will Become Rich
Of course, sometimes attention can be negative. If you are rich and money isn’t a concern when traveling, then lucky you, and perhaps you can disregard this piece of advice. If you aren’t rich and you look like a stereotypical foreigner, people will likely assume that you have money. In some cases, this is harmless and just means that you’ve got a lot of street vendors and club/restaurant promoters trying to get your business in cities.

If you’re in poorer areas, this could turn into people trying to take advantage of you, so it’s a good idea to know the general prices of things so that you know if you’re getting ripped off or not. If it’s just a few cents or even a dollar, you might choose to let it go, since there is a good chance the person needs the money more than you do anyway. But I once had a cab driver charge me the equivalent of US$80 for a ten minute cab ride. In cases like this, you might not want to just let it go.

Of course, not everyone is like this and you’ll always find nice, ordinary people willing to give you a fair deal. But sometimes, the people who approach you the most eagerly do so because they’re looking to play you. It is good to have this type of caution when you travel anywhere in the world, but in some places in Latin America, for example, cabs aren’t required to have meters, so be sure to always ask the price before you get in.

Depending on what neighborhood and city you’re in, you may also want to be aware of your appearance. Wearing a lot of jewelry suggests you’re wealthy and makes you a target for robbers. It’s always better to carry just as much cash as you think you’ll need for the day with you, and no more. Robberies are common in certain cities and neighborhoods in Latin America at night, and pick-pocketing is not uncommon during the day or at night, wherever there are crowds. Locals can usually advise you if a neighborhood is safe or not – if you decided go to check out a bar just a few blocks away from your hotel and someone recommends that you take a cab those few blocks on the way back, it’s a good idea to do it rather than walk.

9. People Are Incredibly Friendly and Helpful… and the Food is Fantastic
To expand on the previous point, not everyone will be out to get you – in fact, the majority of people won’t be. Sometimes, you’ll look so foreign and lost and confused that someone nearby will approach you out of pure, genuine kindness and ask if you need some kind of help. I can’t even begin to tell you how many times I’ve been lost or confused about where to go or where I was and, sometimes without even needing to ask, a friendly local would take time out of their day to get me back on track.

The food in Latin America is also fantastic. Oftentimes, some of the best and most authentic food can be found in small, family-owned restaurants located off the main tourist drags. From pupusas in El Salvador to gallo pinto in Costa Rica, from Peru’s world famous culinary traditions to delicious ceviches all along the region’s coasts, Latin American cuisine is incredibly varied, but dishes from all countries and regions share one characteristic: they’re incredibly delicious.

Tilapia Rio Negro in a bar between Banos and Puyo

10. People Love Their Country
Latin Americans are some of the proudest people I’ve seen of their countries, and it’s not just when their football team is playing! As much as they want to know about you and your culture, they will want to share theirs with you, whether it is through food, dancing, stories, artifacts, traditions… Take advantage of this, as every opportunity to become closer to a country and its people will make you love and appreciate the region even more. This deep-seated national love is the reason I’ve seen so many friends travel to Latin America once and then become enticed, returning time and time again or even living there for a while. Enjoy it, because this profound sentiment can make your holidays in Latin America truly life-changing.

Night sky over the Elqui Valley in Chile

Photos by Nav Gill and Shutterstock.