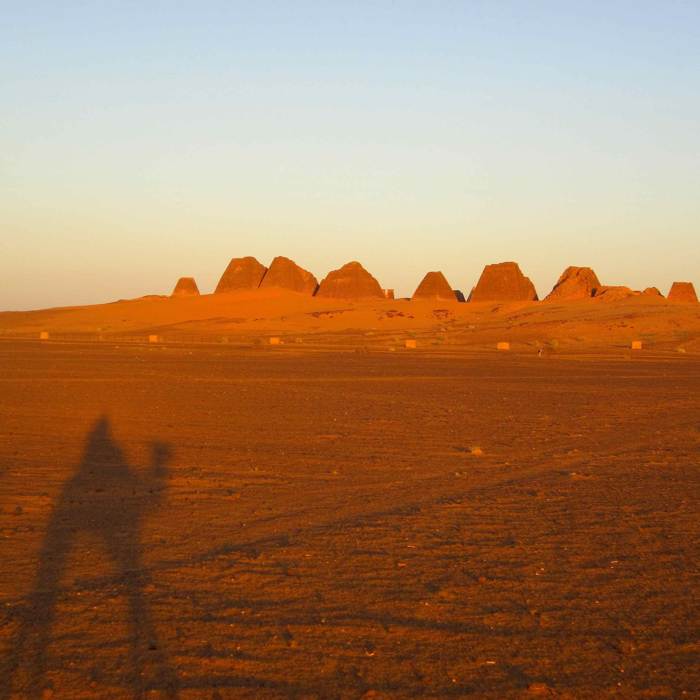 When I arrived home, I found out there was actually a couple of books dedicated to desert camping, hiking, and other useful FYI for people who want to play Indiana Jones for the first time in their life and hope that it will not be their last.

Some people don’t even know where is Sudan located in Africa… How I managed to sleep that night is still beyond my understanding. Perhaps the backpacker training of many years has taught me to fall asleep under almost any circumstances and with any background noises, from squealing hippos to monastic singing.

Armed with a $5 tent, a small backpack with food and water essentials, a pen, a notebook, a camera and a lot of enthusiasm, I took a bus from Khartoum on that excruciatingly hot afternoon, because I heard that the pyramids in Begrawiya look best at sunset and sunrise (duh, so does everything else!) The perspective of camping among ancient monuments, or perhaps inside one of those, was thrilling. I did ask around among the people I’d met in Khartoum, if they wanted to tag along, but Sudan does not exactly get crowds of wanderlusting tourists every day, so I found myself, as always, hitting the road alone.

Meroe became the main burial ground and capital of the ancient Kingdom of Kush around 600 BC, and its economy thrived for many centuries, due to the proximity to the Nile and developed iron and pottery industries. Later on, the Kingdom had constant beef with the neighbouring Roman Egypt and southern kingdom of Aksum, and most likely fell sometime around 3 century AD. Nevertheless, the Meroe site in Sudan remains in the shadow of Egypt’s Luxor and Giza pyramids, and Sudan’s visa policy is a royal pain in the ass for almost any passport.

As I got dropped off in the middle of the road, surrounded only by desert sands and a couple of slashed tyres, I started walking towards the pyramids to reach them before the sunset dawned upon me, and promptly got a ride on a camel to the improvised ticket booth where for an equivalent of $4 I was issued a ticket and advised not to camp inside the pyramids. Soon after this, both the lady from the ticket booth, the camel guy, and a bunch of children selling rocks, all disappeared into nowhere, and I was left alone in the mighty ancient kingdom of Meroe, scaling the sand dunes, rolling down from them, taking close-ups of the bas-reliefs and glorious panoramic shots of the setting sun that started filling the desert with golden glow and contrasting black shadows.

First thing you must know about camping in the desert, is that there is wind. It is so incredibly strong that even if you manage to set up your tent in the first place, make sure to weigh it down with everything you can find, otherwise in the morning you might wake up somewhere in Oz.

Secondly, there is sand (thank you, cap’n obvious). It is not just a grainy mass that gets into your backpack, your hair, your eyes, ears and all cavities. Upper layers of the desert in some places actually resemble silver dust that might kill your camera in a few hours and stay sprinkled like sticky glitter all over your body for the next couple of weeks.

Thirdly, there are animals. You probably will not come across sandworms of Frank Herbert’s fantasy world, but venomous desert snakes are quite real, and they like themselves some warm place to crawl into at night. Make sure to zip up your tent before you go to sleep.

Finally, there is sound. Camping in the desert can bring you some of the most surreal hearing illusions you’d ever have. There is no bird twittering, no rustling of leaves, no hum of the breaking waves. As I fell asleep in my tent around midnight, I was suddenly awoken by the most terrifying sound one can hear in the dead silence of the desert: the sound of footsteps. Someone sneaking around, rattling the zipper on the outer side of the tent, trying to get in. I grabbed my phone and saw that the battery was treacherously low, and no mummy fighting squad would be able to get here from Khartoum on time anyway. In my mind, I went through all the objects in my backpack I could possibly use to stab the zombie pharaoh and run for my life. Where would I run anyway? To the highway where probably one truck every hour gave me a chance of being picked up? Also, I was really about to pee. Myself. Of fear.

And let me bring you back to issue number one: the wind. The wind plays with your mind. The wind screws with your imagination. The wind was rustling the sand dunes around my tent, creating that very sound of absolutely human footsteps that scared the wits out of me. As soon as I came to this realization, I heard myself exhale with relief in the silence of my little fortress of a tent.

I poked my head outside – and if it was a horror movie I’d have been snatched by the mummy at that very moment. But the sky was clear, the full Moon was shining over the majestic pyramids, the constellations were sparkling in the galaxies far away, and the wind was giggling at its own prank. I sat outside for a while and admired the calm and quiet of the surrounding scenery.

Even if some mysterious ghost was wandering around that night, its tracks were swept away by the sand dunes by the time I woke up in the morning.

1. Water. No kidding, a lot of people forget about it.

4. Good sunblock for face and body.

5. Light sleeping bag. You don’t want to carry anything heavy but do not assume that you can dig yourself into the warm sand and sleep. It gets pretty chilly here at night, with the wind.

9. Headlamp or a simple torch, in case if there is no moon. And don’t forget extra batteries!

10. Portable charger for your phone and camera: small, medium and large.

11. A solar battery might be a good idea to have as well.