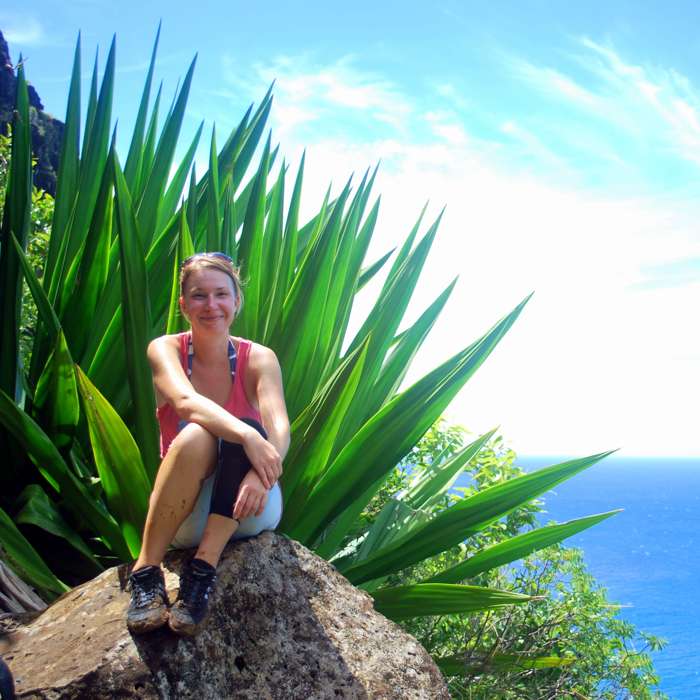 When you’re in Hawaii, wherever you go you keep discovering natural wonders that stun you with their sublime beauty, magnitude and variety. But even among them, the Kalalau Trail, located on Kauai island, stands out from all the Kauai hiking trails. The views of the endless ocean and wild beaches visible from high above, rainbows in the skies, enchanting valleys, refreshing streams and waterfalls and the omnipresent sweet smell of guavas will stay in your memory forever if you have a chance to walk the trail once in your life.

The Kalalau Trail goes along the Na Pali Coast for 11 miles, starting from Ke’e Beach and ending at the beautiful and secluded Kalalau Beach. Most of the trail is high above sea level, providing breathtaking ocean views as the path edges around cliffs and cuts into lush and picturesque tropical valleys. The trail drops to sea level only at two points: the beach of Hanakāpīʻai (two miles from the beginning of the trail) and at the final destination – Kalalau Beach.

To hike you will have to purchase a permit. The Kalalau Trail permit costs $20 per person per day and it is highly recommended to buy in advance, as only a limited number of permits are issued each day and they often sell out.

You have two options in doing the hike: reach the Kalalau Beach in one day, spend the night there and return the next day; or stop over for the night in the middle of the trail, in the Hanakoa Valley (6 miles from the beginning of the trail) on your way there and/or back.

View over the ocean in Kalalau trail

Our plan was to attempt to reach Kalalau Beach in one day, as in the evening of the next day we had a flight to another island. Eleven miles didn’t seem like too much for one day to us and we planned to start at 8.30, but due to usual unforeseen complications we started at about 10. This was our first mistake: it is better to start as early as possible, because it gets hot really fast. Plus, you will need some extra time, because you’ll want to make a lot of stops not only to enjoy the stunning views, but also to have some rest, as the trail goes up and down.

Our second major mistake quickly became obvious. We failed to buy water purification tablets and decided to just carry all the drinking water we would need. Water for two days of hiking under the burning sun – that is a lot of weight to carry. My backpack started hurting my shoulders after the first half hour. Carrying all this water definitely slowed us down significantly and distracted from enjoying the beauty of the trail. There are streams and waterfalls with fresh water along the way and I would highly recommend to have water purification tablets and carry only one big bottle of water with you.

The first long stop was Hanakapiai beach. It is a beautiful place with a fresh water stream and some caves to hide from the sun. Swimming is not advised, because of strong currents and waves.

Several hours later we reached Hanakoa Valley. By that time it was getting late and it became obvious that, unfortunately, we would have to camp out there and would not make it to Kalalau Beach. In the camp site there is a composting toilet and two roofed shelters, but neither is very appealing, to be honest. Good thing: there is a stream where you can freshen up and refill your water supplies. If you are camping out in the valley make sure to have some strong mosquito repellent, since there are lots of those creatures in the forest.

The way back was much easier and faster, because we got up early and because we got rid of most of our water.
It was a little sad to leave the Na Pali Coast unconquered. I sincerely hope that one day I will get a chance to give it another try. I would recommend planning to spend a night at the Hanakoa Valley on the way to Kalalau Beach. Otherwise, even if you do get there in one day, it will be late by the time and you won’t have time to fully enjoy the place. Alternatively, you can get there in one day, but allow yourself to spend the next morning on the beach with the thought of spending a night in the valley on your way back.

So, if you have decided to challenge yourself with hiking the Kalalau Trail, you will need the following:
Water purification tablets.

3. Strong sunscreen for body and face.

4. A cap and sunglasses.

9. Some warm clothes for the night like fleece jacket (men, women). It doesn’t get too cold at night, but you will want to have something covering your legs and arms.

10. And certainly don´t forget your camera, you will want to take lots of pictures!