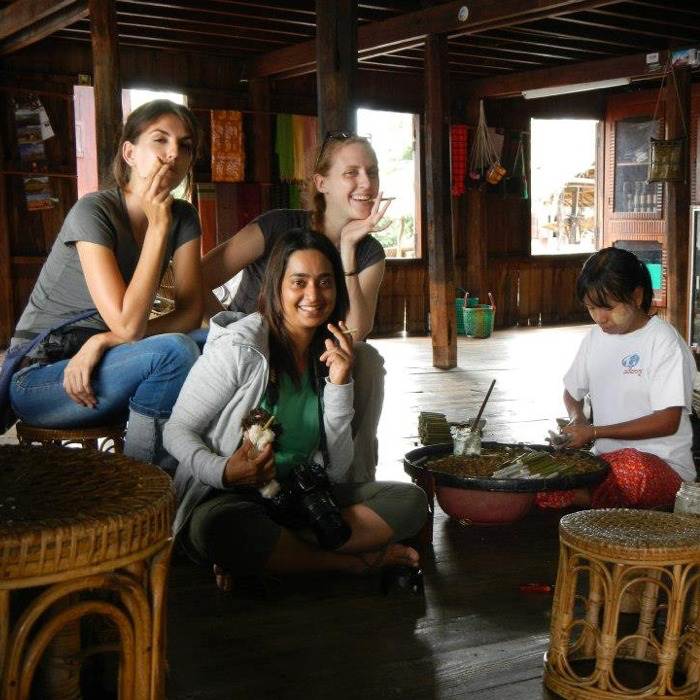 When it comes to spectacular sights in Myanmar, Inle lake wins hands down through natural beauty, beautiful sunsets, the friendliness of people and the unusual encounters you will have with it’s residents. Inle lake is located among the rolling Shan hills in a fertile valley. But being almost 3000 feet above sea level the temperatures are cooler than the rest of Myanmar, something I had not expected. Luckily my travel companion had a waterproof fleece (men, women), can change to any kind of warm jumper, and thanks to that and my travel towel, which I used as a scarf, the temperature was actually refreshing.

Fisherman at Inle Lake at sunrise

I had spent the last three days doing one of Myanmar’s best treks: the 60 Kilometer route from Kalaw to Inle lake. A great trek that takes you through the some pristine countryside and remote mountain top villages, yet doesn’t require a high level of fitness. The villagers were very welcoming and were eager to invite us into their houses for sweet Burmese tea and fried samosas and were more than happy to let us photograph them. I had carried a lot of my camera equipment with me (wide angle lens and a tripod) and after 2 days we had taken over 2000 photos between us. Alternatively, you can take an instant film camera for more fun! And don’t forget your portable charger (small, medium or large)! Luckily I had a spare memory card and could keep on snapping. I recommend that you wear good trekking shoes (men, women) and socks as by day three my feet were a little sore. Also a inflatable pillow to make the village sleeps more comfortable. My companion had a different problem – being eaten alive by mosquitoes! But for all minor discomforts when we finally glimpsed Inle lake all we felt was serenity!

As soon as we arrived in the small town on the edge of Inle a guesthouse owner found us and directed us to his place. As we dropped our bags a boat driver arrived and politely asked if we wanted to see sunset – we did. Forgoing the much needed shower instead we sat back in the motorised long tail boat and sped out onto the giant indio lake, surrounded by mountains. The air was fresh, warm and the sky was slowly turning pink. We had forgotten our camera back in the room but luckily our guide told us the famous fishermen are more active in the morning. Without asking, he told us our itinerary for the following day. He would pick us up at 5.30am and show us the fishermen at work. Then we would have breakfast at the morning market, followed by a visit to the Tribal market which is of the 5 different markets that pop up on different days around the lake. Later we would visit the floating temple and a few craft shops, including a cheroot (Burmese cigar) workshop – one of my favourite memories there! The markets and shops were great places to get souvenirs and traditional handicrafts. We followed his plan and thanks to his knowledge of the lake, had an amazing day.

Betel nut at the market

On the second day we rented bicycles and drove around the surrounding area, through sunflower fields, small villages, cycle paths that once were busy roads and even a vineyard. A random downpour had us wishing we brought rain jackets but also forced us to hide out in a secret tea shop full of locals. By the afternoon our muscles were so sore from the hiking and cycling (take cleansing wipes and muscle relief cream with you as no pharmacies in Myanmar sell it), so we decided to take the rest of the afternoon off and sample a glass of wine or two at the vineyard. These 5 days, from trekking to floating around Inle by boat is one of my favourite memories from visiting Myanmar, and I recommend it to anyone who is visiting soon!

Photos by Laura Gibbs and Shutterstock.